Cannabis is the Answer to a Painful Problem

The following is a research paper that I wrote for an English class at Southern New Hampshire University. I am publishing just as I turned it in, complete with references.
However, I am editing in some photos to break it up a bit. Perhaps later I will hyperlink the references, and remove the parenthetical citations, but for now I will leave it as is.

Cannabis is the Answer to a Painful Question

There are many types of pain, but pain is the primary reason people seek care from physicians (Blesching 404). Opioid-based medications like Fentanyl (duragesic), oxycodone (Oxycontin, Percocet), morphine, Dilaudid and methadone are currently the primary treatments prescribed by physicians for severe chronic pain. Deaths from opioid pain medications are at a catastrophic level in the United States, the United Kingdom, Australia and Canada (“Opioids”). However, in areas where cannabis has been legalized for the treatment of chronic pain, those deaths have fallen by over 25% (Young). If cannabis was legalized universally for the treatment of chronic pain, fewer people would overdose while attempting to find relief from this symptom.

In December 2015, CNN headlines screamed, “Drug overdose deaths reach all-time high,” when reporter Nadia Kounang announced opioid based drugs (including prescription medication) were responsible for 61% of those deaths. Ms. Kounang followed up three months later in the same publication with the Federal Drug Administration’s answer, “FDA requires ‘black box’ warning on painkillers” in which they finally warned consumers about addiction, physical dependence, the possibility of overdose, and death. These were similar to the warnings the FDA issued in 2013, intending to educate physician and patient alike (2015; 2016).

The suicide rate among patients who suffer from chronic pain is double the rate in the rest of the population. Some would say chronic pain is a disease in its own right. More than 20 percent of Americans report from suffering some degree of chronic pain. It is connected with the absolute worst quality of life (MacCallum). More people die from opiate pain medication than any other medical treatment for a non-life threatening conditions.

Although opioid-based medications are the most common treatment for pain; recent studies indicate opiates are not effective for treating chronic pain. According to the the Centers for Disease Control and Prevention (CDC) when it recently announced it does not recommend physicians prescribe opiates for chronic pain, one reason stated was the risks of using this drug class for this symptom outweigh the benefits. According to United States 2014 statistics, 52 people died each day from prescription pain medication (“An important shift on opioids”).

Five and a half years before writing “Doctors told not to prescribe opiates for chronic pain” for USA Today, Liz Szabo published an extensive viewpoint titled, “Treatments for Chronic Pain Can Lead to Prescription Drug Abuse,” in the same publication. In the 2010 piece, Ms. Szabo delineated the extensive problem prescription pain medication has become in our society; in the follow-up this March, she reported the CDC’s eventual response: Opiates are now considered to be only a very short term treatment at as low a dose as possible. A handful of exceptions were made, particularly in end-of-life circumstances (2010; 2016).

When the CDC announced in March 2016 they no longer recommended opioid pain medication for patients with chronic pain, they did not give clear alternatives. In the past five years, when attempting to avoid the temptation of taking opioids due to addiction, even patients who identify themselves as addicts or as allergic to opiate-based medications are being pushed those same pain relievers at every emergency room or physician’s office visit (Koons; Slighte). The CDC did not indicate how physicians should treat chronic pain without prescribing their favorite medications (Szabo “Doctors”).

Cannabis has been used to relieve pain and spasticity since ancient times (Mathre 112).
When using cannabis for chronic pain, many patients report they are able to reduce, then eliminate, not only narcotic pain relievers, but also antidepressants, benzodiazepines and anticonvulsants (Floyd; Mathre 121-123; Slighte).

In the United States, the first law in relation to cannabis came into effect before the states were united. The 1619 law ordered farmers to grow “Indian hemp” in Jamestown Colony, Virginia (Ditchfield & Thomas x). In spite of overwhelming evidence to the contrary, the United States federal government currently contends the cannabis plant is dangerous and has no medicinal value (Ditchfield & Thomas xvi).
In 1996, California and Arizona were the first two states to vote into law medical marijuana (Mathre 51). Since then, 22 other states and the District of Columbia have voted into law various cannabis products for assorted conditions. The following states list “chronic pain,” “intractable pain,” or “other debilitating conditions defined

by physician” in regards to treating chronic pain with cannabis:

However, cannabis remains illegal on a federal basis and this is enforced through raids carried out by federal authorities on a weekly basis on medical establishments (Wattles).

In spite of its opposition to the concept of cannabis having medicinal value, the United States government has issued several patents for the use of cannabis in medicine. At least two of these are specifically related to how cannabis helps patients who are experiencing pain (Eckroate 23).

Studies examining opioid overdose deaths in this country from 1999 to 2010 have shown in areas where medical cannabis has been legalized, significantly fewer people are dying from opiates. In fact, the longer there has been a medical cannabis law in place, the fewer deaths there appear to be. During the first year, deaths dropped about 20%, but by the sixth year of medical cannabis legality, there were more than one third less deaths from opiate-based pain medication than were anticipated (Bakalar).

Rather than being a gateway drug TO opioid addiction, cannabis appears to help patients recover from opiate addictions and treat their pain in an alternative manner. There is also evidence to suggest cannabis may help assist in general abuse recovery (Ditchfield & Thomas 49). Other studies show cannabinoids (active components of cannabis) have the ability to work together with opioids so the pain medication is more effective and the patient can reduce their tolerance to the opiate, causing the patient to require less medication for the same relief (Mathre 121-123).

There are many people who do not understand the methods 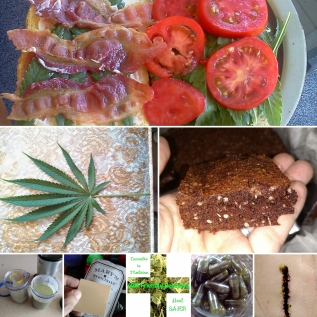 employed by medical cannabis users in the treatment of disease. To much of the world, rooms full of acrid smoke and teenagers “couch locked” from popular movies are what they picture when you say the word “marijuana”. “Cannabis” is a less known, but a preferred term among patients who are very serious about this botanical medicine. The current cannabis treatment preparations in tinctures, capsules and cooked into meals would not be recognizable to the marijuana user of the 1960s and 70s. Cannabis can be consumed as a topical, vaped in a e-cig, taken as a capsule or inserted as a suppository (Backes 101-105). Contrary to popular opinion, the stereotypical “lazy stoner” does not represent the modern medical marijuana patient who by and large reports he is able to “get on with his life” as it was before pain became a daily issue.

Pharmaceutical companies are not ignorant to the possibilities created by cannabis. A cannabis-based medication named “Sativex,” developed by G.W. Pharmaceuticals, has shown great promise relieving pain and spasticity in controlled studies since 2014. It has not yet been FDA approved for widespread use (Cervantes). As with any other pharmaceutical product, Sativex is priced to cover the years of research required to bring it to market, making it more expensive than most could afford–much more expensive than growing an herb in your backyard.

Opponents to medical cannabis programs often ignorantly use potential for addiction as an argument against marijuana. What they fail to understand is the slight capability for cannabis to cause dependence is much different than addiction drug-seeking behavior commonly found with opiate, tobacco and alcohol addictions (Bultman and Kingsley 98; Eckroate 135-137). The small percentage of marijuana users who do display a dependency may exhibit irritability and difficulty sleeping as well as some nausea upon quitting use (Bultman and Kingsley 97). The symptoms the patient was relying on the cannabis to treat will also return upon ceasing consumption of the herb.

There are other clinicians who are developing their own methods for managing or alleviating chronic pain. One is Pete Egoscue. He has written books about the exercises he employs to rid people of their chronic pain forever (“Pain Free”). Unfortunately, most people are lazy when it comes to their health. If there is a pill to pop, a suppository to push, a joint to smoke or a tea or tonic to drink they will do it much faster than they will ever pick up a book and read it, much less actually learn exercises and do them repeatedly enough to be effective (Whiteman).

More than 1.5 billion people suffer from chronic pain worldwide. That includes over 100 million Americans. Deaths from opioid pain medications exceed all of those from illegal drugs for ALL age groups, from 15 to over 65. The largest group dying are those from 45-54 (“Deaths”). The numbers are staggering. What is just as shocking is that NO ONE is dying from cannabis. In fact, in areas that have legalized medical marijuana, significantly fewer people are dying from opioid pain medications.

When evaluating cannabis versus opioids for chronic pain, there are two simple but profound facts must be acknowledged above all others:

The Chief of the CDC was quoted on March 16, 2016 stating, “We know of no other medication routinely used for a non-fatal condition that kills patients so frequently,” when speaking about doctors prescribing opioid pain medications (Szabo “Doctors”). When researching possible deaths from cannabis, Rep. Blumenauer from Oregon stated it perfectly in November of 2014 when he said, “it’s zero!” (‘It’s zero!’).

It is not enough to take away the source of the fatalities without providing a safe and effective replacement for pain control. Cannabis is a treatment that provides relief without the fear of accidental death via overdose. If physicians want to “FIRST DO NO HARM,” they should recommend medical cannabis for chronic pain FIRST. 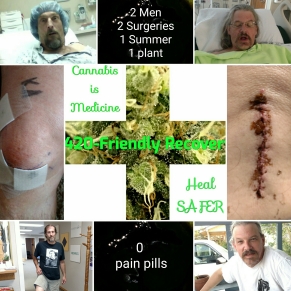